Power of My Guru 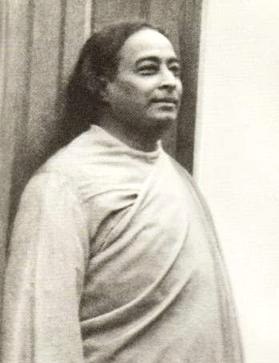 Of course, my memories of him are only the last years of his life, whereas I heard many stories about him from early, early on. And they also were thrilling stories- how he would come on the lecture platform, full of energy! He would demand that his audiences greet him! Rise to his level of energy! He didn’t want any sleeping people there.

He was very dynamic. He would come out and His first question would be, “How is everybody?” And everybody would answer, “Awake and ready!” “How feels everybody? Awake and ready! “He was only willing to talk to people when they would respond on that level. And that was the way he spoke.

One time, two people got up and started to walk out of the lecture. Master said, “Sit down! You’re never going to hear another talk like this! You know! Sit down!” Oh! They very fearfully sat down.

Heaven and Hell Begin Where We Are

He had also a very good sense of humor. But always it had a little truth there too. There was one time he 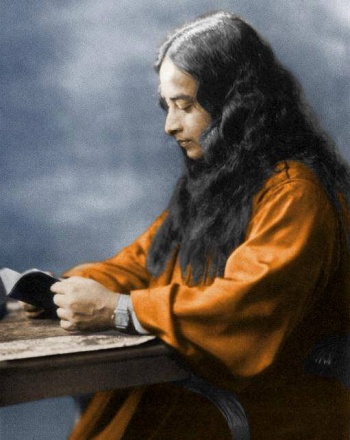 was going to a lecture, and he was dressed in his Orange robes. On the train, on the way to the lecture, this Orthodox minister of some sect, I don’t know which one, came up to him very angrily and said,” Do you believe in Jesus Christ?!” And Master said, “Well yes, of course I do!” “Do you accept Jesus Christ as your only Savior!” Master replied, “I accept God as my Savior and I believe that He has affected his salvation through many Masters, not only through Jesus Christ.”

“Unless you’re accept Jesus Christ as your only Savior, you will go to hell!” Of course, the whole carriage was very intrigued by this conversation, so they were all listening intently. And Master looked at him, and with a gentle smile said, “Well I may get there by and by. But, you, my dear friend, are there already!” And everybody in the car laughed, because it was so obvious – if there is a hell in this world, it’s the hell of harmful emotions, and he was so full of anger and condemnation and judgment. We have to understand that Heaven and Hell begin where we are.

But he was marvelous.  In his sense of humor, often, I don’t say it had a barb to it, because it was kindly; but it often had a point to it.

One time somebody was trying to convert him, through his Church. And Master said, “What about that serpent who talked, and told Adam or told Eve, tempted Eve?” And the man said, “In those days serpents could talk!” And Master, he just took off his hat and bowed to him. He said, “I bow to the temple of ignorance which I behold before me!”

He’s Not a Judging God

But he was marvelous! One time another person was saying that, “We are all sinners. We are all going to hell.” And Master answered him. He said, “Do you have a son?” He sort of was surprised at this change of subject. He said, “Yes.”

He could see, (because Master could read people’s lives easily), that the son had trouble with drinking. And he said, “Does he cause you a little trouble?” The man said, “Yes, he drinks too much. I’m so sad about it.” He said, “Well, I have a cure for his drunkenness.” 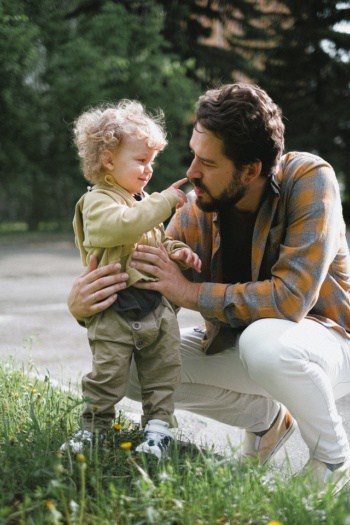 And he says, “Well, when the next time your son comes home, drunk like this, shove him in the oven, and then close the door!” The man said infuriated, “how can you, how can you even dare talking of a father treating his son like that!”

Master said, “You have that love toward your son, don’t you think God has much more love for you as your son,that he would want to condemn you, to eternity, in hell for a few mistakes?” And the man, with this dramatic lesson, understood. Master was always talking about God’s forgiveness. He’s not a judging God.

A New Era to Religion

Master brought a new era to religion, as well as to society, the era of joy, an era of trust in God. God is on your side. He wants you to come out of delusion. I think of Master as really the avatar or teacher of this age, because he brought a whole new way of looking at things. And his approach to God was so beautiful.

He said, “God is on your side. He’s your friend. He wants you to come out of delusion. He doesn’t want you to err!” Yes, he did create this universe – God on the one hand wants the show to continue, but on the other end, he hates it, because he loves his children and doesn’t want them to suffer. And, in the end, of course, they realized that there was no suffering. It was all a dream.

So, his take on religion was all positive. And whatever suffering we go through he insisted, that it’s all a 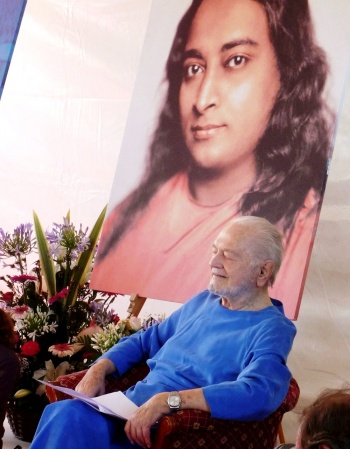 dream. And when you wake up from the dream, it all seems unreal. No one who ever found God said, “What a scam!” They all say it was well worth all the incarnations of suffering for this Bliss, this perfect Bliss!

One of his disciples, she was not so much a disciple as a student, but she was in charge of the church at Hollywood, and, a sort of a housekeeper. And towards the end of her life she, well when she was dying, she was allowed to linger for two weeks.

And during those two weeks, he said that, I could see her going through her life and thinking of “that desire” and “this attachment” And, “I don’t need that very much”. And her whole countenance became more and more radiant.

And at the end of her life, before she gave her last gasp, she said, “Swamiji is here.” He has promised that for those who are faithful, he would be there, or one of our other line of Masters would be there to receive us into the Otherworld. So, all his emphasis was positive.

This is an extract of a talk by Swami Kriyananda
You can watch the video here https://youtu.be/5nYvTgM82W0