In wild and lonely places you may find him even now: Shiva, the Great God. Usually he is absorbed in deep meditation. And you won’t be likely to mistake him for anyone else. 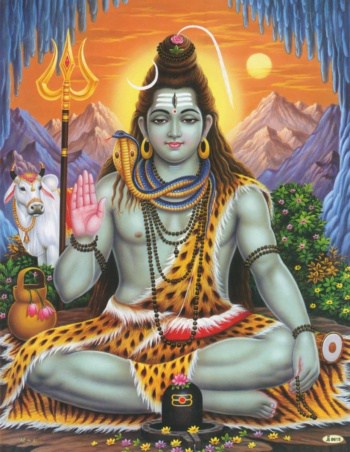 Well, at first glance he does look something like a beggar. His skin is covered with wood ash. His clothing is poor and skimpy. Beggar-like, too, he may carry a begging bowl. And sometimes, also, he goes from door to door begging alms. Yet there’s something very different about him – not at all like a beggar.

In fact, in a way he seems like a king, for he gives you a feeling of enormous power. He doesn’t seem rich like a king, certainly, and yet – you can’t imagine him needing anything, and that does make him rich in a way – richer than most millionaires, who with all their money keep on wanting things they haven’t got.

Again, Shiva doesn’t seem powerful in any ordinary sense. He lives alone. There isn’t anyone around for him to boss about. And yet – somehow you get the feeling that everyone he meets – even things like trees and birds and animals – draw their power from him: that they need him in order to exist at all.

There’s a strange look to him. Yet he doesn’t seem to care how he looks. His hair is thick and long and matted from never being brushed. He piles it in a high coil on top of his head. At the top of this coil, too, is placed a new moon to show that Shiva’s thoughts are always of high things. If ever you see him, you may find him dressed in only a leopard or tiger skin.

One thing you’ll know him by is his tall staff, which he always carries with him. This is no mere stick, but a trident: that is, a staff with three metal prongs at the top, something like a tall fork (though I’m sure he never uses it to eat anything with). There’s a hidden meaning to this trident. It shows that he’s always centered in himself. 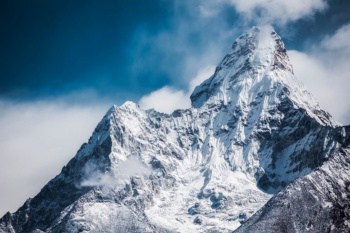 You won’t often find him in just any wild place. His home is the snowy peaks of the Himalaya mountains, in the north of India – the highest mountains in the world. He seldom comes down into the towns of men, and when he does so it’s usually to make people long for his remote kingdom of silence and peace.

The Himalayan mountain he lives on, you see, is really just a way of saying. He lives in that part of you which is high above all your worries and distractions. Even the stories about Shiva are really only told to help us to understand things about our own Higher Self – that part of each of us which can reach up and, maybe, touch the hand of God.

The Message of Shiva

For Shiva’s work on earth is to remind us that, out of God, nothing lasts – that life itself is short compared to eternity, even if we should live a hundred years.

So you see, that’s why, although he dresses like a beggar, still he’s so very rich. He seems poor, because he never puts a tag on anything that says, “That’s mine.” But He’s really very rich, because He doesn’t need anything. He never weeps for anything. He’s always happy in himself. Anyone who can be like that can do anything he sets out to do in life.

If Shiva doesn’t often come down to mix with people like us, it’s because he waits instead until our minds our calm, and our hearts can no longer be upset by anything. And then it is that He whispers to us, “Here I am, my Friend, in your heart of hearts – in the still silence just behind your busy thoughts.”

So here’s how we may think of Shiva: He’s a silent yogi, meditating inwardly. He smiles when people call him the terrible Destroyer because he knows that all he’s ever tried to destroy is men’s ignorance.

In joy, sometimes, he may lift his hands high above his head and sing, “Vyom! Vyom! Hara! Hara!” This means, “Let me take from you your fears, your tears and littleness, and let me give you the mighty, thundering power of Aum – my sacred word, in which resound all power, all the happiness in the universe!”