As a photographer of many years, I would look at photos of Paramhansa Yogananda and wonder: “What was going on in the room during that photo? Why does Master have that particular expression at that moment?” 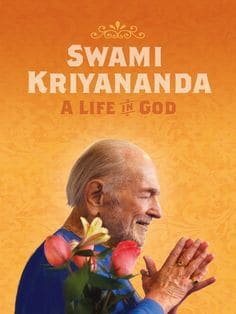 Many people have been inspired by a photo I took of Swami Kriyananda. It is in people’s homes and altars all over the world. It is the cover photo for the large-sized book on the life of Swamiji, Swami Kriyananda: A Life in God (right), which includes hundreds of the best photos from his eighty-seven years of life.

This is the story behind that photo, and why Swamiji had that particular expression at that moment.

Although I’ve taken thousands of photos of flowers, natural scenes, and people, I rarely took photos of Swamiji. When I was in his presence, I was much more inclined to inwardly tune in to him than to snap photos.

In December 2010, Maria, my wife of twenty-five years, suddenly left the body after a long battle with cancer. A few months later, Swami Kriyananda visited Ananda Village for the first time since her passing. In April he gave his first satsang in many months there, at the Easter Sunday Service at Ananda’s Expanding Light Temple.

I was still extremely distraught over losing my close spiritual friend, and this would be the first satsang by Swamiji since Maria had left the body. It being Easter Sunday, a celebration of renewal and resurrection, made it especially poignant for me.

For many years, Maria and I would sit in the same place when Swamiji gave a satsang—sitting on the floor on the front left side of the temple, close to Swamiji’s feet. This was a habit that naturally developed. Most people in the U.S. would sit in the chairs during his talks. It reached the point where some people noticed, with someone asking, “Did Swamiji ask you to sit there?”

That Sunday I sat at our usual place on the floor, adding to the intensity of my feeling. At the last moment, I took my camera. I never took photos of Swamiji from up close, so as not to bother him, but something told me to bring it this time.

There is a secret that not all photographers fully realize. When you take a photograph, you are not shooting a scene, object, or a person. The only thing that a camera sensor sees and absorbs is light. This is why experienced photographers try to take photos during the “golden hour,” just after sunrise and just before sunset.

Yogi photographers also understand that people, animals, flowers, and places radiate their own spiritual light. Finally, there can be a strong connection between the photographer and what they are shooting.

Swami Kriyananda wrote, “What if the flower the photographer is photographing be capable of actually responding to the feelings he projects toward it? Might there be, in his subsequent print, some vibration of the flower’s own appreciation for his love?”

How much more so would that be true with a photographer’s feeling for a person being photographed, than a flower?

In this case, how much did my own current emotional state—which included a very strong mixture of grief, deep divine yearning, and extreme affection and love for Swami Kriyananda—affect that photo?

That morning, there was an unusually beautiful light streaming through the window behind where I sat. For whatever reason, the entire day was suffused with an astral light. In the afternoon, the famous tulips at Crystal Hermitage gardens were embraced in the same unusual light. The day included rain, sunlight filtered through rain, rainbows, and perfect light for photography. The best photos I’ve ever taken of those beloved gardens were taken that day. They can be seen here.

Sunday Services at Ananda Centres in the U.S. begin with a reading from Swamiji’s book, Rays of the One Light, which includes passages from the Holy Bible and the Bhagavad Gita, the two great scriptures of east and west. Nayaswami Devi read that morning.

As Devi reached the end of the reading, I decided it would be a good time to take a few photos without bothering Swamiji, as he was sitting quietly listening.

I took only four photos, just as Devi finished reading the following words of Lord Krishna from the Gita:

Ah! ye who into this ill world are come,
fleeting and false,
set your faith fast on Me!
Fix heart and thought on Me!
Adore Me!
Bring Offerings to Me!
Make Me prostrations!
Make Me your supremest joy!
and, undivided, unto My rest your spirits shall be guided.

Swamiji’s expression was thrillingly blissful. In that moment, he shows us how to “Fix heart and thought on Me! Adore Me! Bring Offerings to Me! Make Me prostrations! Make Me your supremest joy!”

He also seemed to be demonstrating the fruits of a lifetime of such offering.

To me, the room at that moment seemed suffused with an otherworldly light. Was it from the window behind me, or was it from Swamiji? Is it possible that the light itself was honoring the worship that Swamiji was offering in that moment?

It is notable that a dazzling astral light precedes most of the miraculous experiences of Paramhansa Yogananda in his Autobiography of a Yogi. In that book, he writes, “Among the trillion mysteries of the cosmos, the most phenomenal is light. . . . light remains the most subtle, the freest from material dependence, of any natural manifestation.”

Yogananda also reminds us that, “God’s first command to His ordered creation (Genesis 1:3) brought into being the only atomic reality: light. On the beams of this immaterial medium occur all divine manifestations. Devotees of every age testify to the appearance of God as flame and light.”

Returning from the realm of light to this mundane world, photographers never know what the camera has captured until they see the images later. When I got home, I downloaded the photos. In three of them, Swamiji was completely out of focus. The autofocus feature, due to focusing on the background, had become the “out-of-focus” feature!

Only one photo was usable. When I saw it, I gasped in awe, as I felt it was the best photo of Swamiji I had ever seen. I fully understood that it was not ‘my’ photo, but a divine gift from Swamiji, from the angels of light, and perhaps from Maria, watching over and sitting next to me.

Easter Sunday celebrates the resurrection of Christ, and of all of us. With his life of devotional self-offering, Swami Kriyananda showed all of us how we uplift and resurrect ourselves from the inevitable pains and losses that life brings.

Below you can see the original, unedited version of that photo. 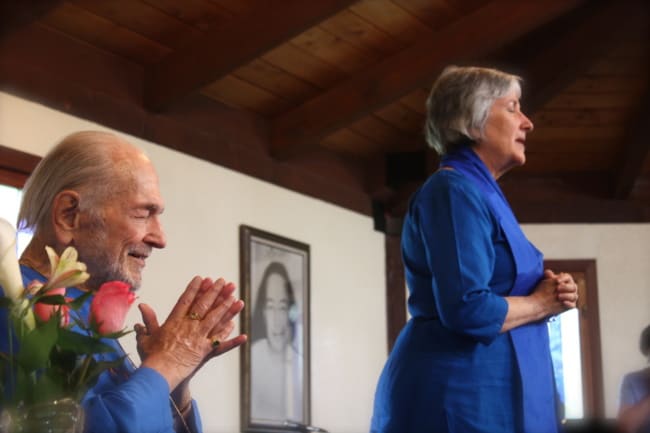 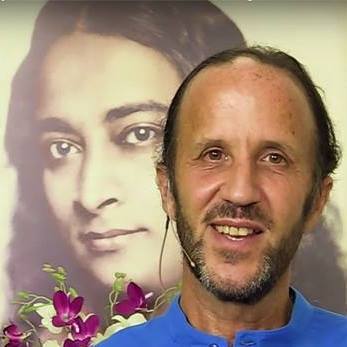