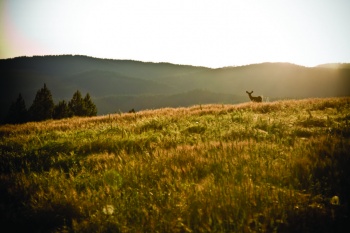 Early on, in my journey on the path, I nursed an idyllic imagination of life. It was like the Finding Happiness movie story, being just as what I saw of the people living in the Ananda Village. As beginner’s luck would have it, some early experiences drew me deeper into this dream. I imagined myself meditating for long hours, doing a few daily chores, maybe some seva (nothing too strenuous) and enjoying being in nature in the company of like minded yogis. My world would be a perfect place, the routines would be rhythmic, the mood would be joyful and spiritual progress would be rapid. No dampeners, no falls, a smooth ride, just like a German car. In hindsight, I now laugh at how naive I was in my thinking. I saw only the flowers along my path, missing the thorns and the weeds that infest my life.

Just like in my imagination, there came an opportunity to live at the Ananda Community in Pune. As an added bonus, Swamiji was to live there as well. The call to move to Pune was a no-brainer at the time. I paid the initial housing deposit shortly after hearing about the spiritual community being built. It was monsoon when we visited Pune for the first time; waterfalls littered the countryside, the emerald hills were pleasant to behold, and the birds’ melodies felt like an orchestra, in stark contrast to the the mind-numbing horns of Gurgaon traffic I had grown used to. How soon could we move to Pune? I was swamped by a feeling of urgency.

After the initial exuberance, it dawned on me that I would have to pay forty odd lakhs for our home in the community and would not get a loan to pay for it. In addition to this, there would be several other bills to pay off, and expenses to be met. I might still need a job, I mused, as this practical correction dawned on my yogic dreams.

A few weeks after the decision to move to Pune was made, I was headhunted for a job, fortuitously based in Pune. I travelled to the beautiful German city of Dusseldorf for an interview with my employers-to-be. The white Christmas outside my office, with heavy snowfall, made it a setting reminiscent of a fairy tale. I was interviewed by several executives, which culminated in them making an offer I simply could not refuse. As I sat on a plane bound for Delhi that Christmas eve, I pondered upon all that that my new job would entail; the workload was large, the hours were long, but the role was right up my alley. Three months later, we moved to Pune. 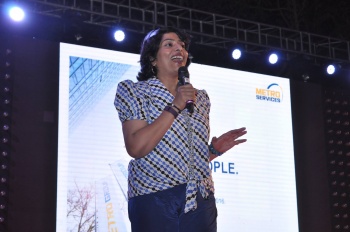 Meanwhile, Swamiji had moved to Los Angeles to establish Ananda there. The community housing project was behind schedule and my new office was at the other end of town. The yogi who dreamt of meditating for hours on end in the promised land had to change gears. I was now busy traveling to Kharadi from Balewadi everyday, comforting my homesick children and heading off to Germany every now and then. Life was chaotic and I was seldom left with thirty minutes to meditate, and that too, once in a while. A few drops of joy came my way when I got to meet Gurubhais and monks who lived close by. The rest of it was hard work, coupled with the struggles of a long commute, life in a new city, tedious household chores, unending paperwork and the taxing bureaucracy that came with the aftermath of moving houses, among others dominated my everyday reality. Amidst keeping my work going, looking after my children, and getting used to this brave, new world of mine, I often wondered exactly what had become of me and my plans.

I Start Teaching at Ananda

It was around this time that Swamiji launched the AKASH (Ancient Keys to Attaining Success and Happiness) lessons. Teamed up with a few other gurubhais, I was to teach these classes. I read those lessons again and again; I listened to Swamiji’s lectures, and began to apply them in my work. As a teacher, I had to be well-prepared, which forced me to do something spiritual and meaningful.

Then came the Satsangs hosted at our home on Thursdays. I knew two chants I was yet to perfect, and that was it. There was a natural pressure to learn chanting, which still lingers, as I am not as good as I would like to be, even today. Over time, I improved and reached a level where my playlist housed five chants.

Then came a time when I was asked to teach meditation lessons. I started meditating and preparing for classes I was to teach. The first class I ever gave had me co-teaching with Nayaswami Sadhana Devi. I started to feel nervous, worrying about how I could possibly balance my inadequacies with her depth of practise and the wisdom of a seasoned veteran. It was only when I came to be by her side on that fateful day that I realised just how much of a blessing and guide she was to not just me, but all those around her. She would not be there for my next class, which meant that I would be co-teaching with Nayaswami Jaya. I have always been nervous when it came to Jayaji. Back when I was still in Gurgaon, I had turned in a data entry seva project to him past the deadline. Since then, had felt like a student with poor marks approaching their teacher whenever I saw him. He helped me get through the class, shared some useful tips and encouraged me to teach more often. In a year or so’s time, I got to a decent place in my teaching endeavours and even began to enjoy teaching, while improving my spiritual practices.

Then came the Pune city centre project that my husband picked up. I was given the task of generating some income for the centre. For the longest of times, I had dreamt of running a handicraft store, a desire which stemmed from an innate love for Indian handlooms and handicrafts. It was a hobby of mine, to visit various craft bazaars and interact with craftsmen and artisans from all around. It was one of those somewhat shortsighted desires one comes to have as they grow, where I dreamt of the ambience of the store and the excitement of a store like that, while ignoring the troubles that plague such a line of work and the hard work that is needed to ensure that the show notes on. Here I was, tasked to set up a boutique. I went out looking for suppliers and began to make cushions, Kriya malas, fridge magnets of the Masters, key chains, and more. My work was not without its hurdles; the cushion tailor never worked to any deadlines and varied prices and design often. I experienced the pressures of running a boutique cupboard (it would be quite the stretch to call it a store), which made short work of my handicraft store aspirations.

I was educated about creativity in one’s pursuits and generating a small income for the centre. The rent bills for the centre were a tidy sum and I was encouraged to tithe. This is where I began tithing regularly and experienced the freedom of my purse. Tithing opened my heart and I experienced the joy of spending without guilt, but with care. A divine protection and abundance entered my financial life. The gurus do not need our money; it is we who need to learn to let go of the attachments and share in their work. 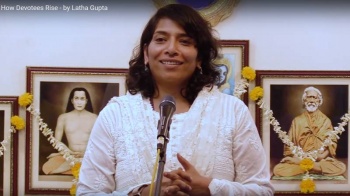 Along came another milestone; I was asked to lead Satsangs by Nayaswami Tushti. I had attended and enjoyed many Satsangs but giving one was a huge step up. To prepare for this new role, I listened to Satsangs of various Ananda Ministers, meditated and then expanded my repertoire of chants. When Swamiji gave a Satsang , his magnetism captured the audience, but what could I do? Will I be fluent? Will I be inspiring? Every form of self-doubt imaginable cropped up. I wrote to Jayaji, asking him for guidance. He sent me a lengthy email which had everything I needed to plan and share an inspiring Satsang. One of the important tips he gave me was to remember that everyone in the room were my friends, and that there was nothing to worry about. I have used this framework which has made sharing Satsangs an enjoyable seva for me. My confidence to speak and clarity of thought have developed as I kept working on teaching and speaking at Ananda.

Several flowers followed, such as Ananda Yoga. These flowers have helped me stay the course on the path; they brightened my path and helped me deal with the thorns more effectively. In the course of my day-to-day life, I encounter a lot of difficulties. There are times when I do not deal with these tests as well I would like to; but there has always been a blessing. I have come to a point where I don’t dwell on my defeats for too long, choosing to get up, and get on with it. I learned to get back up from my falls and not worry about the spectacle I might make of myself. I learnt to be more compassionate with both myself and others. I learnt to do my share of the work more faithfully and regularly than I did before. I learned to gain momentum and energy from the Energization Exercises, and to put my worries to rest by reading Master’s teachings. Most importantly, I pray that I have the wisdom to stay strong, accept what comes my way, and deal with it rather than feel sorry for myself. This is just the beginning; the road ahead will only get steeper from here on, and I hope that the fragrances of these flowers of mine lingers with me, as I take yet another step on the incredible journey of this Path.