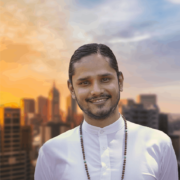 There’s a very standard pattern most lives of most Saints kind of take. And it’s that romantic pattern that we all know. What is it? From a very early childhood, they’re already different. They’re already tuning inward. They’re already not interested in many of the things the world has to offer. And then at a very young age, they find their Guru. They find a spiritual path and then there’s no looking back. They renounce everything. And they usually take on some form of a monastic life. This is a pattern we’ve seen repeat. The details may vary, but the general flow we’ve seen repeat over and over again from eons in the life of every Saint. The same was true for our Guru the same was true for Swami Kriyananda. And if you and I had a chance to rewrite our life script, I have a feeling a lot of us would like to write our life in that way. How many of you tell me- if only I had come to these teachings sooner! Everyone has said that and no matter how early we come to this, we still say that, “if only I was two years old when I came to this teaching!”

But Rajarsi Janakananda chose a different narration for his life. He was born in America to a very poor 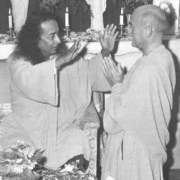 family. His father was a farmer and he used to pick cotton and fruit on his father’s farm and then go and sell it. It was a very tiny village that he grew up in, and he would sell it at the corner of whatever big building that was there in his village. He’d make butter from the milk from his cows and he’d sell that butter to the people in town. He studied only up till the age of nine in school and then he studied no more, because his father needed him to help him to bring money in to the family.

At the age of fourteen he started working as a sweeper, in the local railway station and he kept the railway station clean and orderly. That was his railway job. He earned two dollars a month for that. Little by little by little by little, he moved up because of his sincerity and because of his desire for excellence. And as he moved up, everybody wanted him. At that time, it was very hard to get jobs. But for this little child, everybody wanted him, because wherever he, went magic happened.

At the age of 16 he went to night school to study law, to finish his high school and to become a chartered accountant all at the same time. All three classes he was taking simultaneously. He was the youngest person at that time in the history to become a CPA. He was admitted into the Bar before he even passed his law exam. And by the time he was 25, he was the owner of the largest reciprocal fire insurance company in the world! He was a millionaire! And this is in the 1920’s that was during the Great Depression, the worst recession the world has seen. By today’s standards, he would be a billionaire! 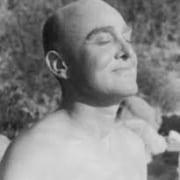 At the age of 40 in 1932 he met Yogananda. He was attending a lecture of some Hindu Swami who happened to be in his city, who was a great sensation. So he said, let me also see who this is. And he attended a lecture by Yogananda and he says of his own accord; now Rajarsi was not looking for God. Rajarsi said, “My life was business, but my soul was sick and my body was decaying and my mind was disturbed and I was a totally frustrated man. I was so nervous that I could not sit still even for a moment. I was constantly fidgeting.” Anybody have that problem?

So Rajarsi went through his classes, like we go through our classes. Rajarsi was like all of us. We didn’t know anything. OK we came across an advertisement for meditation, Let’s go to Ananda. Some of you now are the product of the Khar center.

But that was the life he chose: but did he really choose that life? What do you think Babaji had something to do with that? Remember when we talked about Lahiri Mahasaya’s life- what do we say? He waited until Lahiri was 33, until Lahiri had his responsibilities, had a family. Rajarsi waited until he was 40 to meet his Guru. And then from then on, he did not look back. But did he renounce his life? No, No! He continued continue to grow his empire.  He became an oil tycoon, he became a banker, he had orchards, of course, he had his insurance company. It just grew and grew and grew, he made more and more money. Well, after that whatever he earned he gave to his Guru.

Until 1932, Yogananda struggled in the US. It was very hard for him. Yogananda had to go and earn the 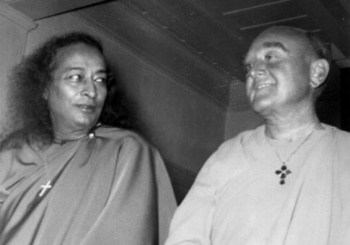 money.  He would go give lectures; people would give some donations for that. He would go to fundraising parties, with some socialite here and there. I mean can you imagine a self-realized master having to essentially just go around and say, “Please help support my work. Please donate a little here, please I’m trying to do this. Yogananda often said, “ I felt like a beggar, until I met Rajarsi.” He said, “Because Rajarsi not only supported the work, but he understood the work.”

That, was the difference. So many people were willing to support the work. It was not as if he didn’t have donors and that people were not saying, “You’re doing such a wonderful thing, I want to give you donations for the cause”. But to the others, he had to verbalize it. But to Rajarsi he didn’t. Because Rajarsi’s consciousness was so attuned to his Guru’s.  He knew exactly what the Mission was. He knew exactly what was needed and he did not for a moment hesitate. It takes a lot of power and faith, in the spiritual path, that you have given your life to, to do that. It’s not at all easy.

Rajarsi was not a teacher. For us, once we are on the spiritual path, we say we will become a teacher, we will do this and we will do that. I mean somehow, we create this idea of what the spiritual path is. What is the spiritual path? It’s a complete offering of yourself, to God and Guru. The word “complete” is an interesting word for us. What does the word “complete” mean to each of us? Which part of the word can we hold back in the word complete? Nothing! Why did Rajarsi make such rapid spiritual progress from being the most nervous fidgety fellow to -at the end of his life Yogananda said he had achieved nirbikalpa samadhi? That he and I are the same soul in two bodies.

What brings an individual to that level so fast so quickly? Because once he understood what his Guru was doing, he gave it everything. He went, he made money, he did everything he did for his responsibilities. Yet every moment he had available, he would run to his Guru, he would be in his presence. Sometimes only for a few hours, because then he had another meeting. And he would be coming from different cities, different states, just to be for a moment in satsang, and then leave again. Just to draw on the presence of the Guru.

Rajarsi’s example for me, is not just an example of spiritual abundance. It is an example that says, “What did Rajarsi do to prepare himself for the Guru.”

He sought success in everything he did. You cannot be a successful disciple if you are not a successful 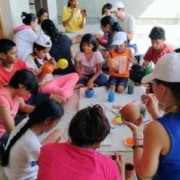 So, for each of us here, we are in this life, we are neither materially comfortable nor spiritually. We feel like fish out of the water. The world also doesn’t hold much glamour for us, but we can’t fully give ourselves to God and Guru, either. We essentially are all stuck. Rajarsi didn’t see the dichotomy of material world and spiritual world. He recognized it’s just energy. Excellence here, equals excellence there. Surrender here equals, Surrender there. Giving yourself completely here, means giving yourself completely there.

That is our lesson from Rajarsi. He is us. We went through, we studied we didn’t think about God. As children we just went on and we went on and we got married and we had a business and we made money and then one day we said, “I need a little peace in my life. I think there’s more to life.” Lo and behold, I come to a lecture. This is Rajarsi. Up to this point all of us are living Rajarsi’s life. Except he sought excellence and success in everything he did.

We must seek that in everything we do, if we are to become the disciple he became- and that requires 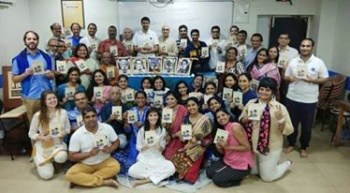 complete giving of ourselves to the Guru, to this world even. If you can give yourself completely to the Divine Lila that God has placed you in, your work is done. For you fulfill the  mission Babaji has given you. We know that Babaji has already assigned several Rajarsis’ for this work. He’s kind of generous that way with us. He has a soft spot for us. But the question is, “Who are those Rajarsis’ going to be?  I hope one of you say it’s going to be me and take that on. Because that’s what Master needed then and somewhat he still needs that now. 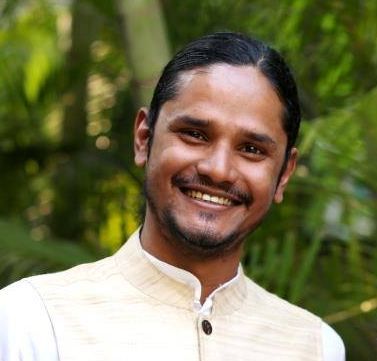