One of the most inspiring characteristics of Swami Kriyananda was his ability to be perfectly holy and perfectly appropriate in every situation he found himself in—whether he was giving a lecture in front of two thousand people, or talking to the clerk of a randomly-picked street shop. The result was always the same: the other party left the encounter inspired and energized. His greatness was not a mask that he put on only when doing public appearances; it was very much a part of him, and it shone in every area of his life, big or small.

A group of us saw a very good example of this just two weeks ago, in a tiny, but very sweet, episode.

The following day would be a big one in Ananda Pune: a full day of classes, workshops, and an art exhibition was scheduled at the Ananda center. Several people stayed until late in the evening helping to prepare everything for the coming events. At around nine o’clock, we paused to go out for dinner in a grand way: we went to a five-star hotel and restaurant called Le Meridian.

The hotel looked and felt like a palace. We, in perfect Ananda Pune fashion, entered it in our working clothes, some of us nearly in pyjamas, and bathroom slippers for footwear. Fortunately, the staff of the hotel didn’t feel inclined to throw us out, and we made our way to the restaurant. There, we picked what we thought was the nicest spot, and sat down at what turned out to be the restaurant’s private room!

This perfectly innocent display of Ananda Pune cheek didn’t go unnoticed: within a few minutes, the main chef had come to investigate what was going on. He was a strong and friendly looking Italian man, with a great deal of energy and the presence of someone who is accustomed to being the boss. Politely, he introduced himself to us and inquired as to who we were.

When brahmachari Aditya told him that he was a monk (“monaco! monaco!”), the man (whose name was Roberto) grabbed his head and sank into the chair next to mine, exclaiming: “Why?!?” 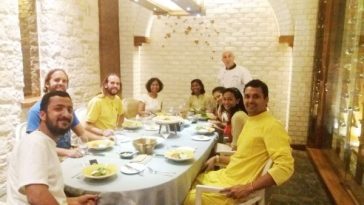 “I don’t understand why people do this,” he said. Then he told us at length of his views that religious beliefs and sentiments should not be openly expressed. Anything from monk’s vows to visibly praying before meals incited his mistrust. To add to his bewilderment, his own son had renounced the comforts of home and family to live as a priest in faraway Burkina Faso. He was a good man, however, inclined toward spiritual ideals, and we listened to him respectfully, although, by this point, all the answers we could give were “mmhmm” and “yes.”

Suddenly, he saw Aditya’s astrological bangle. “What is this?” he exclaimed, pointing at it, “I know this! There was a man… one man used to come here and he wore this same bracelet!”

Of course, we all knew who he was talking about: our very own and dear Swami Kriyananda! Suddenly, the mood of the table changed from one of mild philosophical confrontation to one of mutual joy and appreciation for that very person who had touched all of our lives.

“He came to this restaurant twice,” Roberto told us, “he gave me a lot of power! He was my good friend. Maybe now you can be my friends.”

As Swamiji’s children, we were nothing but thrilled at this turn of events. Few things are sweeter to the devotee than reminiscing about the instrument of God’s grace into his life. This we did freely and joyfully, and so did Roberto. He shared his encounters with Swamiji which, short and few as they were, greatly touched him and changed his life. 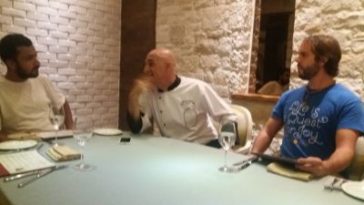 “He gave me two books,” he shared, “and whenever I have a question or a problem, I open a page and read it, and the answer is always there!”

The sweetest part of all, however, was to see his immediate transformation on recalling Swamiji: from a friendly-yet-serious master chef, to a childlike, happy and enthusiastic friend. The encounter that started so (relatively) heavily became light and full of joy.

Afterwards, Roberto took it upon himself to see that we had the best possible experience by taking care of our menu and providing his friendly company. Even though the food was delicious and the environment exquisite, meeting him and seeing Swamiji’s grace at work was, for us, the greatest treat of the evening.

This story is, in a sense, the same story we have heard a thousand times before, but wrapped in different circumstances. It’s the story of how Swamiji, through his attunement to God, changed the course of a person’s life with only a brief encounter. The words of Jesus which I quoted at the beginning of this blog are perfectly applicable to him: he gave as much attention to the little things of life as he did to the big things. Perhaps we could even say that his life became so great because he was so great in the little things. As Yogananda put it, “The minutes are more important than the years.”

This brief episode was a great inspiration to all of us to follow Swamiji’s example and keep God and Guru in our hearts at all times; not only during formal service or meditation, but in every little thing that we do.

As per Roberto, it’s now been almost two weeks since our meeting with him, and he’s kept in touch. Our shared love for Swami ji made him into part of our extended family, to our, and his, joy! 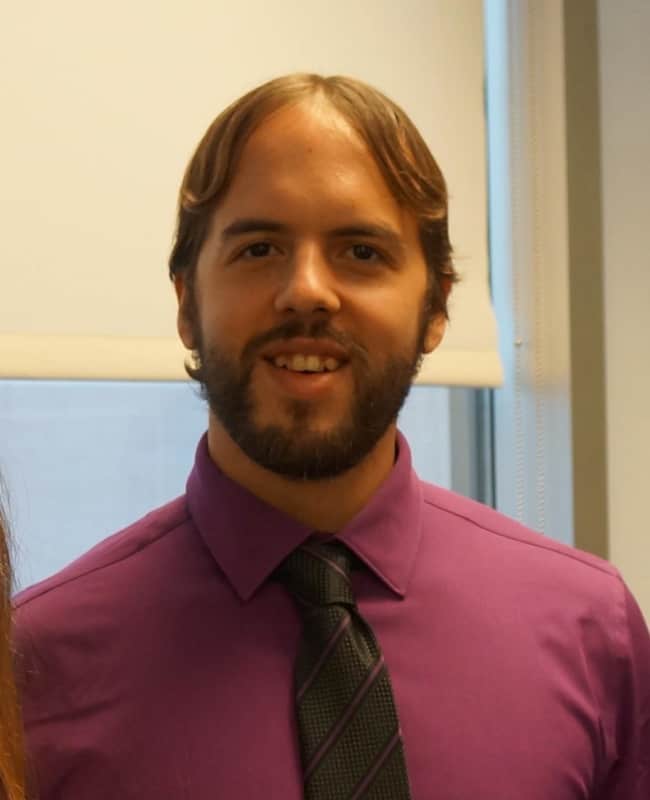