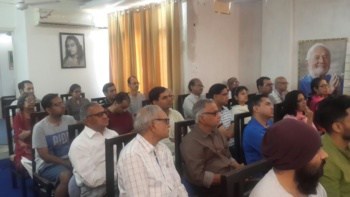 The West Delhi centre of Ananda is currently located in Janakpuri, New Delhi. Earlier it was functioning from a nearby locality Rajouri Garden since 2009. It is now located quite close to Janakpuri West Metro Station. This centre works on the basis of voluntary efforts of its core members who contribute financially to manage its expenses and run meditation programs and events. Most people in this part of Delhi belong to business or trading communities and some people come from professional backgrounds. The Centre functions mostly on Sundays. A typical Sunday would begin with Kriyaban meditation followed by a Satsang and distribution of food offerings (Prasad). The Satsangs and workshops are held on a variety of subjects helping the devotees to live in harmony with their inner self and attain greater depth in daily meditation. This would be usually followed by regular meditation courses, healing prayers and special workshops if any. Sometimes visiting Nayaswamis or other Acharyas also hold special satsangs or workshops.

Another open meditation is also scheduled usually on Thursday evenings and sometimes followed by ananda yoga or Study of Bhagwad Geeta. Usually Kriya ceremony is held twice a year and several new kriyabans are initiated into kriya.