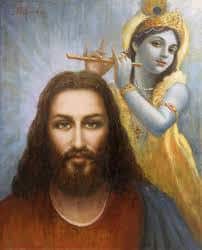 Paramhansa Yogananda often stated that one of his missions was to revive “Original Christianity” as taught by Christ and “Original Yoga” as taught by Krishna and to show their essential unity. He proclaimed that it was Babaji and Christ together who had, through him, sent the teachings of Self-Realization to teach men to attain direct personal contact with God through divine meditation. According to Yogananda, Jesus Christ himself taught his disciples a technique similar to Kriya Yoga.
The following excerpts from Paramhansa Yogananda and Swami Kriyananda’s writings shed more light on the deeper aspects of Christ’s teachings and their similarity with the teachings of yoga.

‘Babaji, Lahiri Mahasaya, and Sri Yukteswar,’ Yogananda dictated, ‘were the three wise men who came to visit the Christ child in the manger. When Jesus became old enough, he returned their visit. The account of his trip to India was removed from the New Testament centuries later by sectarian prelates, who feared that its inclusion might lessen his stature in the eyes of the world.’ – From ‘The New Path’

Yogananda once prayed to Jesus Christ for reassurance that he was interpreting the Gospels correctly. Jesus appeared to him in a vision, along with the Holy Grail, and the Grail passed from his lips to Yogananda’s. Jesus then, Yogananda later told us, spoke the following words of heavenly assurance: ‘The cup from which I drink, thou dost drink.’ – From ‘The New Path’

WHY IS JESUS ON THE ALTAR? 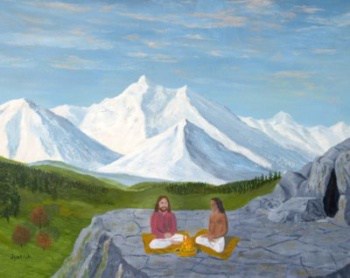 “Was it for political reasons,” a newcomer asked, “that you put Jesus Christ on your altar – because this is a mostly Christian country?”

“No, that was not the reason,” Yogananda replied. “Jesus Christ is one of our line of five gurus.”

“In what way?” pursued the newcomer. “And why have you placed him at the center?”

“It was Jesus Christ,” the Master explained, “who appeared to Babaji in the Himalayas and asked him to send this message to the West. ‘My followers,’ he said, ‘are doing good work, but they are forgetting inward communion with God. Together let us send someone to the West to teach them the art of meditation.’

“That is the reason I was sent. Jesus is at the center because this message to the West began with him. To the left of him is Babaji, then Babaji’s disciple Lahiri Mahasaya. To the right is Swami Sri Yukteswarji, then his disciple – whom, as my Master told me, Babaji had sent to him for training.”- From ‘Conversations with Yogananda’

Self-Realization teachings as the Fulfillment of Christ’s Promise 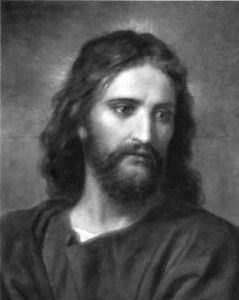 Yogananda and the Boston Sceptic 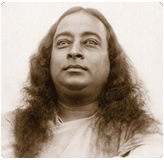